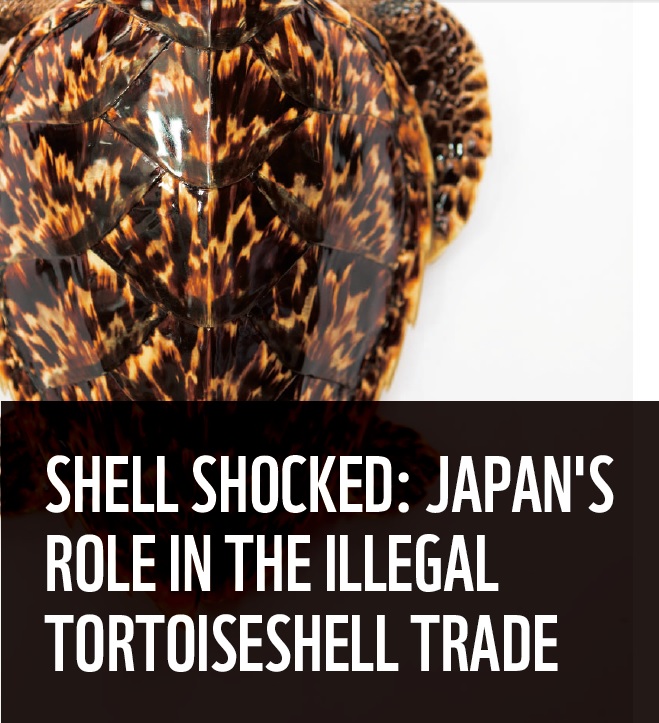 TOKYO—WWF, TRAFFIC and Japan Tiger and Elephant Fund (JTEF) released today a report: ”SHELL SHOCKED: JAPAN’S ROLE IN THE ILLEGAL TORTOISESHELL TRADE”. It reveals that recently the tortoiseshell of hawksbill turtles (Eretmochelys imbricata), has been increasingly smuggled into Japan. This active market in Japan of tortoiseshell crafts, called “Bekko craft” is contributing to the illegal international trade. Hawksbill turtles are one of the seven species of marine turtles and are listed as “Critically Endangered” (CR) in the IUCN Red List,

After World War II, Japan grew to be the largest country importing tortoiseshell equivalent to tens of thousands of hawksbills every year. Japan bowed to international pressure and officially stopped importing hawksbill tortoiseshell in 1993, when more than a decade had passed since it ratified the “Convention on International Trade in Endangered Species of Wild Fauna and Flora (CITES)” in 1980. In a quarter of a century, the Customs of Japan is facing rampant attempts of smuggling hawksbill tortoiseshell into the domestic market. The official Customs record shows that over half of 564 kg of the total tortoiseshell detected between 2000 and 2019 (representing some 530 hawksbill turtles) was done between 2015 and 2019 alone.

The manufacturing and domestic trade in hawksbill tortoiseshell is allowed to continue legally in Japan today, but it is contigent on only using stockpiles that supposedly existed prior to the cessation of imports. However, this legal market has become the major driver soliciting illegal import of tortoiseshell into Japan.

The case of tortoiseshell smuggling, with two Japanese suspects arrested in May 2021, revealed that illegal imports of tortoiseshell have continually been made in an organized manner, catering to orders from bekko manufacturers. In examining the annual rates of consumption of the stockpiles over the years, the annual total of stockpiles reported by manufacturers shrunk from an initial 188.4 tonnes in 1995 to 102.7 tonnes in 1998. Following a steep initial drop, the decline became more gradual, an average of only 4.0 tonnes per year until 2017, when some 28.7 tonnes were said to remain. But continued import suspension of tortoiseshells and their links to the active manufacturing industry, casts serious doubts as to whether the reported stockpiles are truly reflective of the pre-1993 tortoiseshell stockpiles.

It is also of major concern that the online trade could be contributing to an active domestic trade of bekko crafts which are originated from smuggled tortoiseshell. A snapshot survey we undertook in 2019 of major online auction platforms found that there were more than 8,200 sales of hawksbill products (both unused and secondhand) with a total value of about 102 million yen (close to a million US dollars). The most common product types were jewelry (72%), followed by eyeglass frames (11%), with the latter comprising nearly 50% of the sales value.

In conclusion, the report calls for the government of Japan to strengthen law enforcement and tighten the control of stockpiles as well as domestic trade regulations. In addition, it urges the e-commerce companies to introduce a voluntary ban on all sea turtle products across their platforms.