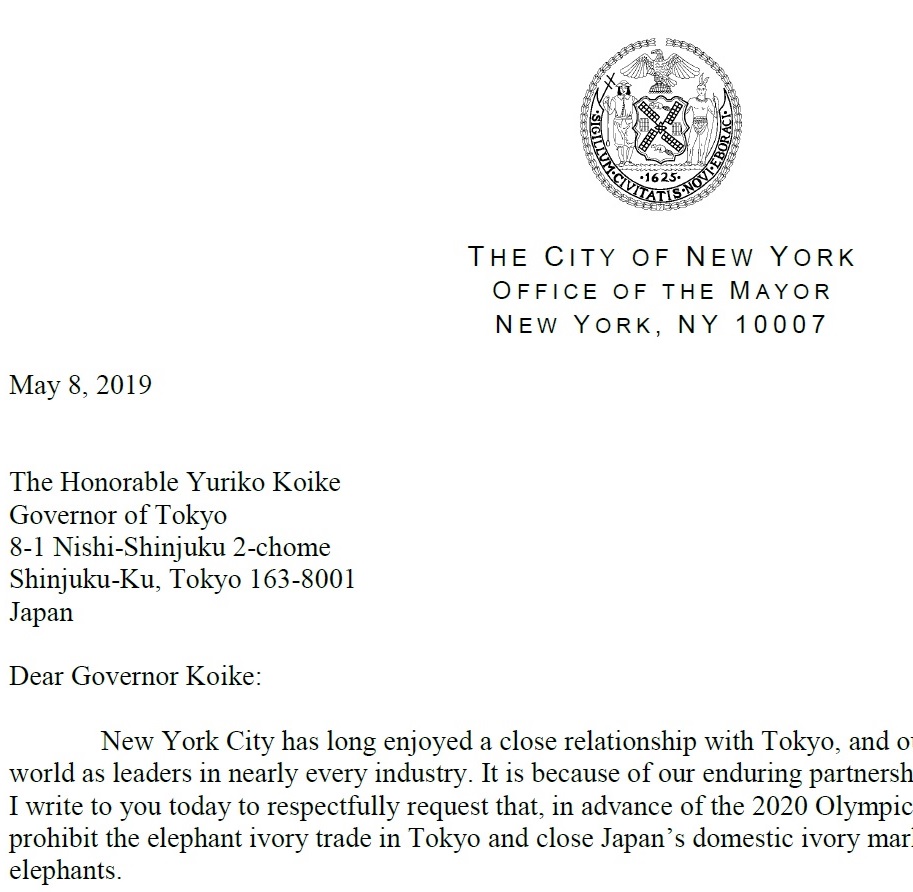 WASHINGTON—As athletes and organizers prepare for the 2020 Summer Games in Tokyo, New York City Mayor Bill de Blasio is asking Tokyo Governor Yuriko Koike to support efforts to end the ivory trade in Japan, the largest ivory market in the world. Mayor de Blasio is among a growing group of world leaders and elected officials urging Japan to ban all ivory sales to combat the illegal ivory trade in advance of the 2020 Summer Games.
In a letter sent to Governor Koike last week, Mayor de Blasio wrote: “Sustainability is a key theme of next year’s games as reflected in the guiding principle: ‘Be better together – for the planet and the people.’….With millions of people traveling to Tokyo, many from countries with strict ivory regulations, tourists and participants may unknowingly engage in the illegal ivory trade by bringing home souvenirs that violate their local laws, causing undue distress and tarnishing their Olympic experience.”
New York City and Tokyo have shared close economic and cultural ties over the last few decades. New York state is one of nine U.S. states that prohibit the sale of ivory products, and the Big Apple has hosted two high-profile destructions of seized ivory — in Times Square in 2015 and in Central Park in 2017. In contrast, after China banned ivory in 2018, Japan became the world’s largest legal ivory market.
Iris Ho, senior specialist of wildlife programs and policy for Humane Society International, said, “The 2020 Summer Games present a critical opportunity for Japan to show itself as a responsible and reputable leader on the world stage. Without an ivory trade ban in place, the Tokyo Games are a transnational ivory trafficking disaster waiting to happen, offering millions of tourists easy access to illegal ivory souvenirs. We can ‘be better together – for the planet and the people’ when we choose elephants over the ivory trade.”
Brian Shapiro, New York senior state director for the Humane Society of the United States applauds this effort to seek great protection for elephants from the illegal ivory trade.

Masayuki Sakamoto, executive director of Japan Tiger and Elephant Fund, said, “In Japan, 80% of ivory is used for the mass production of hanko, or personal signature seals. Ivory is not a traditional material for hanko. There is no doubt that Tokyo residents will give a ringing endorsement to ban ivory sales in order to protect live elephants.”
Amy Zets Croke, senior policy analyst at the Environmental Investigation Agency, said, “Japan’s ivory trade stimulates demand and undercuts domestic ivory bans in the United States, China and elsewhere. To demonstrate real commitment to protecting Africa’s elephants, Japan must close its domestic ivory market before hosting millions of athletes and spectators from around the world during the 2020 Tokyo Games.”
In addition to the letter by Mayor de Blasio, on May 7, 37 members of the U.S. House of Representatives sent a letter to Ambassador Shinsuke J. Sugiyama asking the government of Japan to join the growing effort to close domestic ivory markets worldwide in order to conserve dwindling elephant populations. The letter was co-led by Reps. Madeleine Dean, D-Pa., and Peter King, R-N.Y., and co-signers include chair of the House Foreign Affairs Committee, Rep. Eliot Engel, D-N.Y.
Facts:
• Japan has more than 16,000 registered ivory retailers, manufacturers and wholesalers.
• From 2011 to 2016 more than two tons of ivory from Japan was confiscated by Chinese authorities.
• Japan’s ivory market facilitates transnational ivory trafficking and undermines the enforcement efforts of neighboring China.
• The African Elephant Coalition, representing 32 African nations including elephant range states, is appealing to Japan to close its domestic ivory market.
• Many countries and jurisdictions have announced or implemented measures prohibiting or restricting domestic ivory trade, such as the United States, the United Kingdom, France, Luxemburg, Belgium, China, Hong Kong SAR and Taiwan.